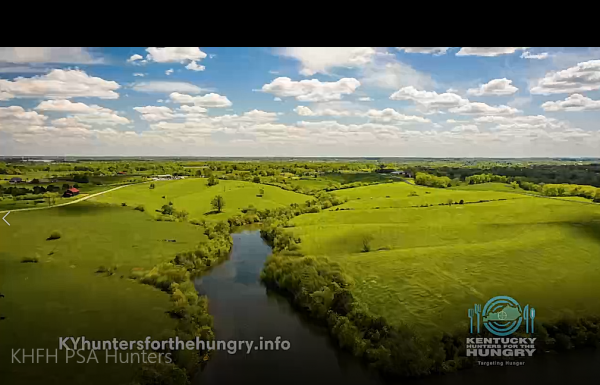 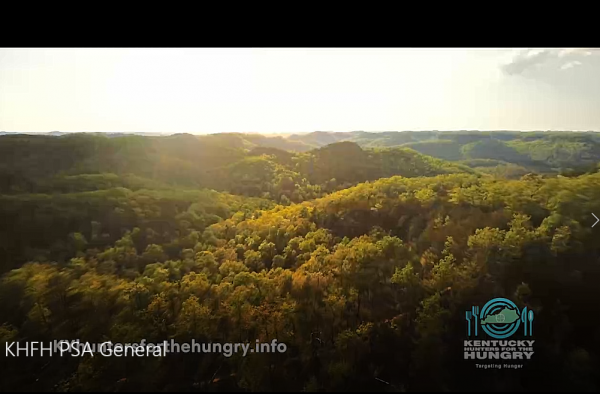 Help KY Hunters for the Hungry Further Their Mission By Donating Deer, or Funding! 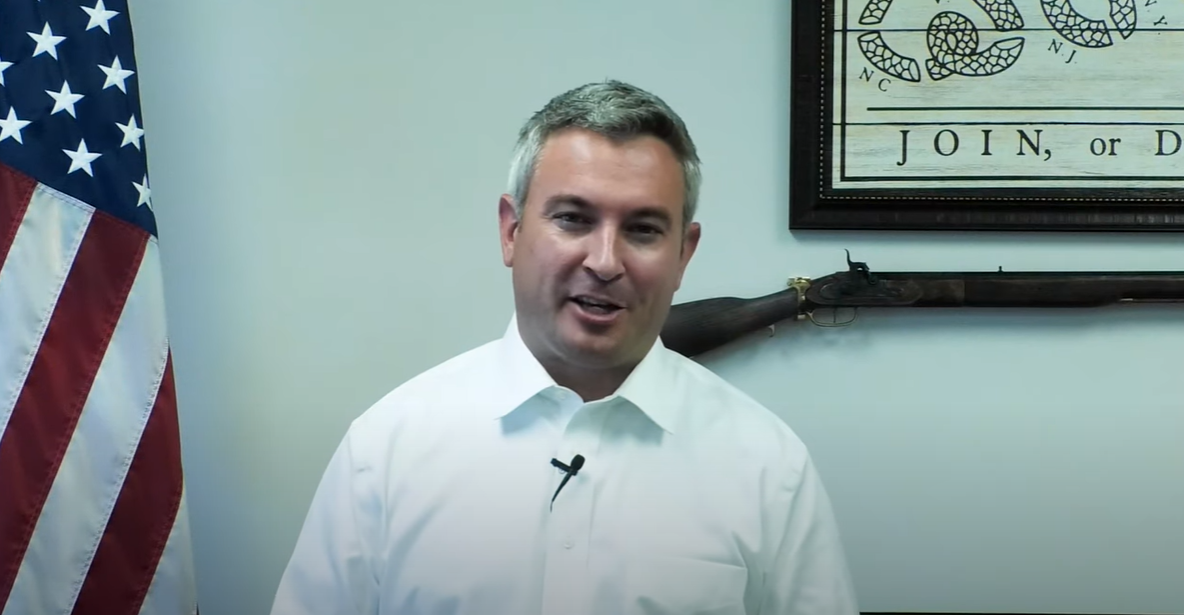 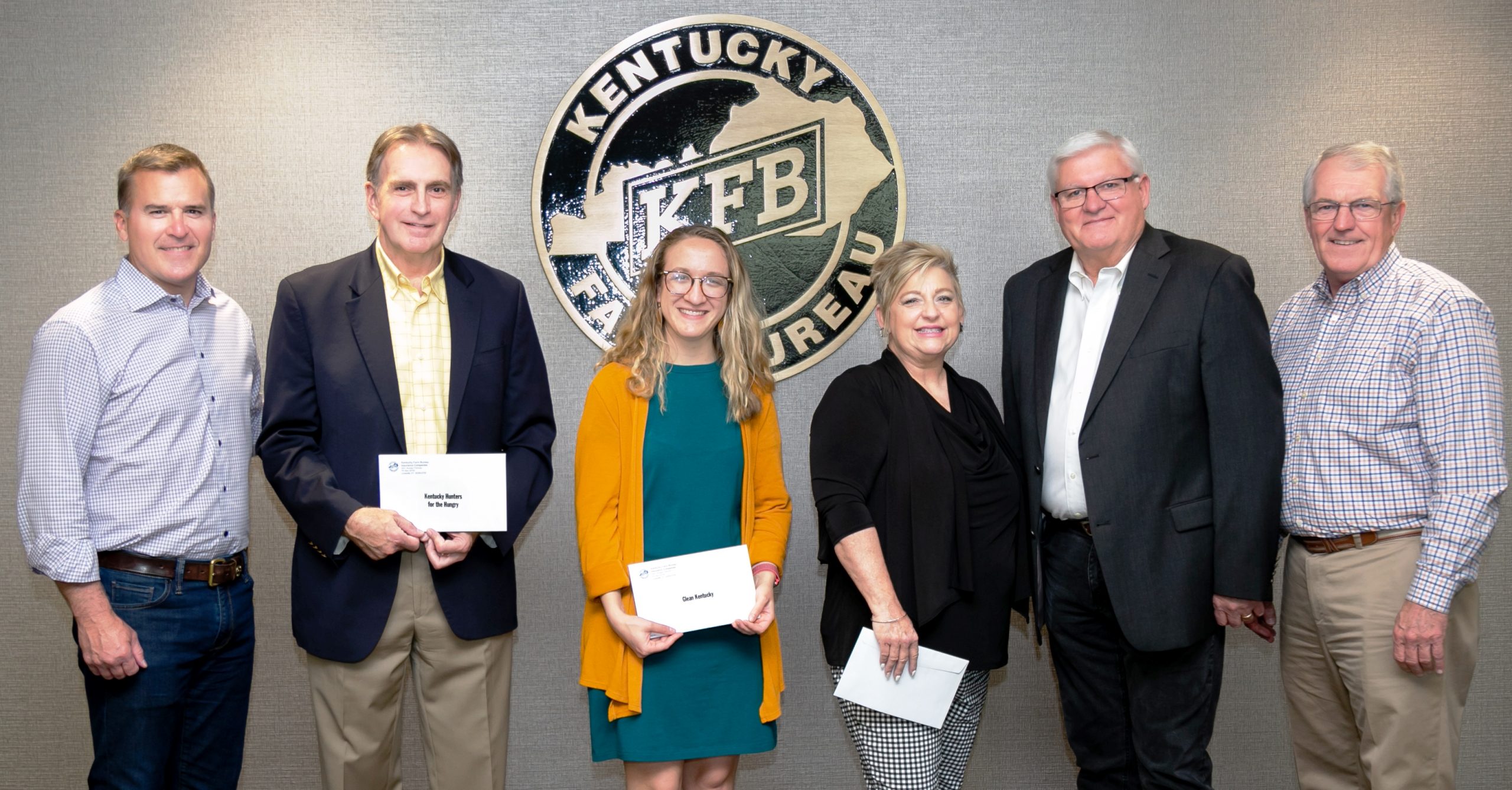 LOUISVILLE, Ky. (April 21, 2021) – On Tuesday, April 20, Kentucky Farm Bureau Insurance hosted its third annual Clays for a Cause fundraising event, bringing in more than $220,000 to fight hunger and food insecurity in Kentucky.

The sporting clays event, which took place at Jefferson Gun Club in Brooks, Ky., was attended by nearly 300 participants and supported by 31 sponsoring companies. Kentucky Farm Bureau Insurance underwrites 100% of the expenses for this event and, therefore, every dollar raised from sponsorships, participant fees, and donations can be given to the selected charity or cause. This year, all proceeds were again designated to support local hunger relief efforts as part of the Department of Agriculture’s Kentucky Hunger Initiative.

“Our goal for this event is actually quite simple: Unite the collective resources of Kentucky Farm Bureau’s many partners and friends, and give them the platform to contribute in a significant way to a charitable cause that benefits other Kentuckians in need,” said John Sparrow, Executive Vice President and CEO of Kentucky Farm Bureau Insurance. “As an organization that has roots in agriculture, our connection to the Kentucky Hunger Initiative makes a lot of sense, and we are truly blessed to be able to make this kind of impact through Clays for a Cause.”

Clays for a Cause was first held in April 2019, raising nearly $116,000 for the Kentucky Hunger Initiative in its inaugural year. The event was canceled in 2020 due to the ongoing COVID-19 pandemic, but a $500,000 donation – $125,000 received in sponsorships and participation fees prior to the cancelation, and $375,000 more contributed by Kentucky Farm Bureau Insurance – was still made through the Kentucky Hunger Initiative that year.

“Though our event couldn’t be held in 2020, we refused to sit by idly while the pandemic made food insecurity in Kentucky a greater threat to many families,” added Sparrow. “That donation sent a strong message about our commitment to the cause. This year, fortunately, we were also able to hold our event and get others involved in championing this issue with us.”

With the $220,000+ raised from this year’s Clays for a Cause, the event has now provided more than $835,000 during its first three years for the fight against hunger in the Commonwealth. This year’s donation through the Kentucky Hunger Initiative will again be divided among three local groups – Feeding Kentucky, Glean Kentucky, and Kentucky Hunters for the Hungry.

“Kentucky Farm Bureau Mutual Insurance Company’s generosity knows no bounds,” said Kentucky Agriculture Commissioner Ryan Quarles. “Since the first Clays for a Cause event, well more than three-quarters of a million dollars has been raised for our Kentucky Hunger Initiative partners. Despite a pandemic, our farmers kept farming and Kentucky Farm Bureau kept supporting those in need. I am incredibly grateful to have the largest Kentucky farm organization continue to support Feeding Kentucky, Glean Kentucky, and Kentucky Hunters for the Hungry.”

“According to Feeding America data, the average cost of a meal in Kentucky is $2.68 and a donation of $50,000 will provide approximately 18,000 meals. Because of the generous support of donors like Kentucky Farm Bureau Insurance, we are much closer to being able to provide the 662,000 meals needed each year to help of those struggling with hunger in our state,” said Katrina Thompson, Executive Director of Feeding Kentucky. “Strong partners like Kentucky Farm Bureau Insurance allow us to continue in our efforts to one day eradicate hunger completely.”

“We are both honored and humbled that Kentucky Farm Bureau Insurance chose our organization as a beneficiary of its Clays for a Cause event,” said Roger LaPointe, Executive Director of Kentucky Hunters for the Hungry. “As part of Agriculture Commissioner Ryan Quarles’ Kentucky Hunger Initiative, Hunters for the Hungry plays a vital role in providing much needed protein to the region’s most vulnerable, especially during this pandemic. We could not fulfill our mission without generous support like this.”

“We are grateful for the continued support of Kentucky Farm Bureau Insurance. For a third year, the KFB community has stepped up to make a significant impact on hunger across the Commonwealth through Glean Kentucky,” said Stephanie Wooten, Executive Director of Glean Kentucky. “We are thrilled to use the funds raised to continue our work of harvesting surplus fresh produce from local farms and connecting it with Kentuckians who need it most. Because of long-term supporters like KFB Insurance, we have been able to bring our work to address food waste and food insecurity to communities across Central and South Central Kentucky.”

Clays for a Cause will be held again in the spring of 2022. For more information about the event, visit https://www.kyfb.com/insurance/clays-for-a-cause/. 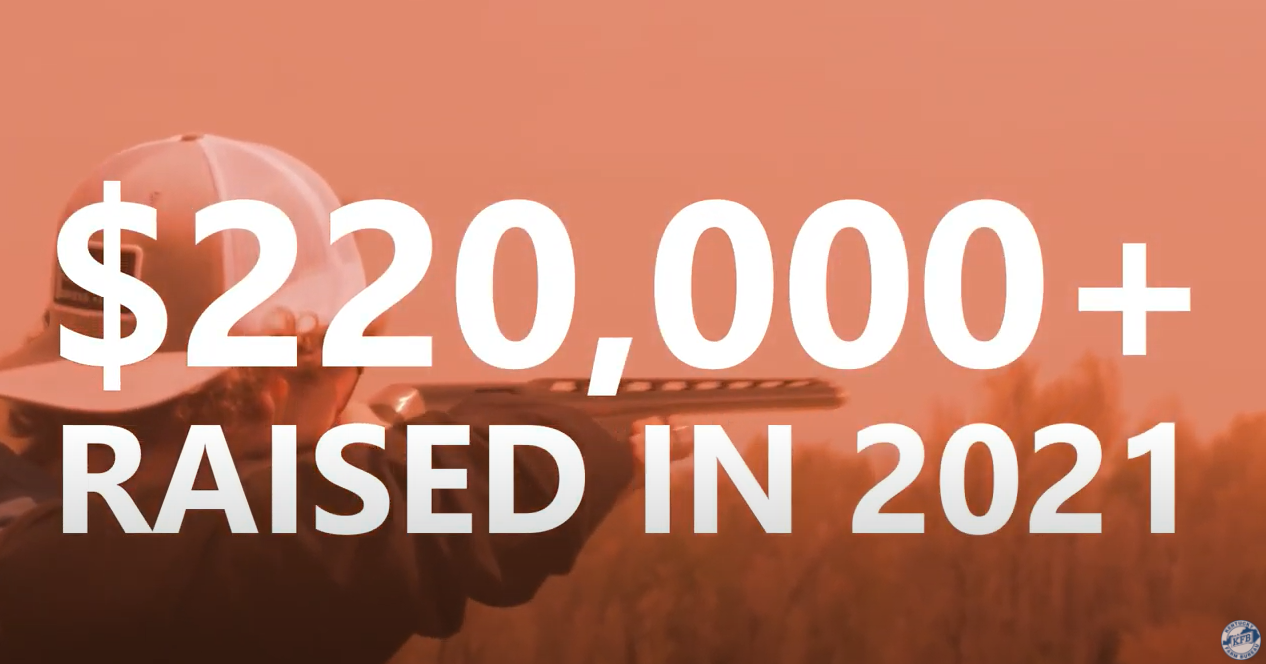 Kentucky Farm Bureau’s Clays For A Cause Benefits KHFH

Kentucky Farm Bureau Insurance’s third annual Clays for a Cause raises more than $220,000 for Kentucky Hunger Initiative, with 25% going to KY Hunters for the Hungry!”

The Healing Place, and How You Can Help Kentucky Hunters for The Hungry

Hunters for the Hungry is a program whereby we raise money all year long to give to processors to process venison that’s donated by hunters around the state and then picked up by either local food bank or charity, who then disseminate it to those in need around the state.

The healing place is Kentucky’s largest social model recovery program for long term residential substance abuse treatment for men and women. We rely on the community support. We love to get donations from the various community resources and that’s why the donations from Hunters for the Hungry are so important. Through donations like this we can enhance the quality of our meal menus on a daily basis.

There are three ways that people can help us. One, of course, is donating a deer, two is by donating funding to help us process the deer. People can go to our website where there’s a PayPal button and make a donation, which is tax deductible. We encourage individuals and corporations, sportsmen’s clubs, churches, or anybody who wants to help to donate. We would really appreciate that. And thirdly, landowners that have excess deer, especially if they have crop depredation they can contact us through our website. We have a program called Whitetail Access and we have hunters that have signed up to help take some of those deer. They can then donate them to KY Hunters for the Hungry to be used to further our mission. 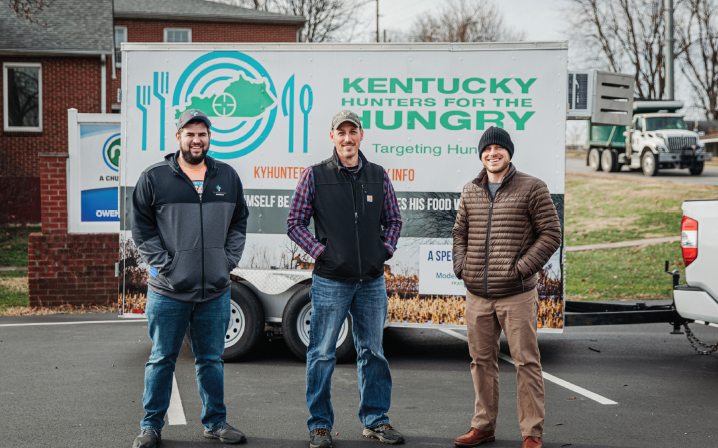 Hunters for the Hungry was formed. A grassroots effort that began in 1988 and formally incorporated in 2000, the organization has funded the processing of deer for use by various non-profit organizations for over 20 years.

“In general, each harvested deer yields, on average, 40 pounds of ground venison,” said Jeremy Shiflet, regional director for Kentucky Hunters for Hungry and Daviess County resident. “We then estimate that four servings are provided by each pound of processed venison.”

As the regional director of the organization, Shiflet is responsible for identifying processors and partnerships that would be beneficial to the nonprofit, as well as identifying organizations that would benefit from assistance with KHFH. Shiflet also facilitates the distribution of the processed venison to local food banks and help offices. 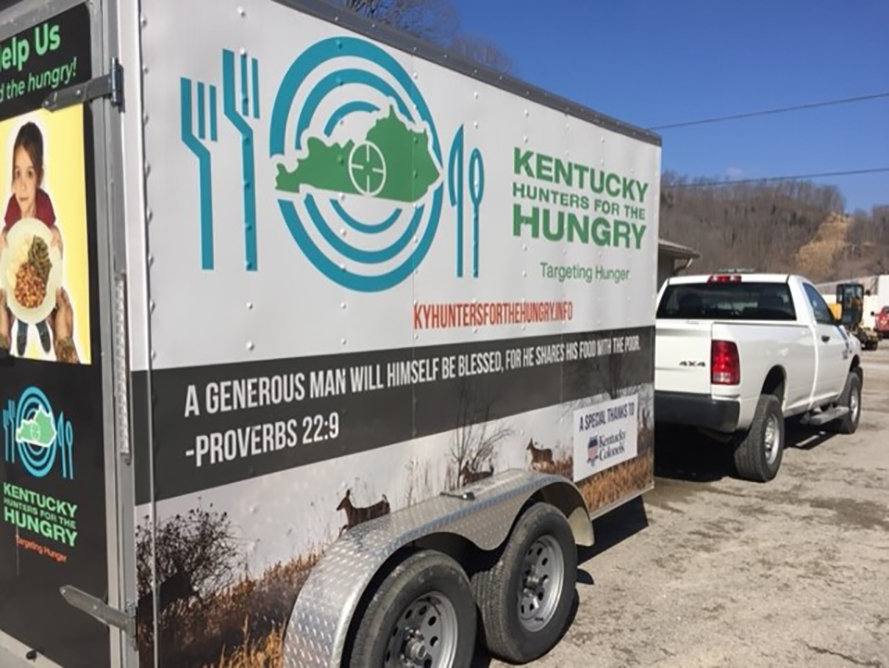 Now, he and Kentucky Hunters for the Hungry (KHFH) are asking hunters to participate in a program where they can hunt and help in a statewide hunger relief program at the same time.

LaPointe is executive director of KHFH, a charitable, volunteer-run organization of hunters and conservationists that encourages hunters to harvest and donate deer each season. 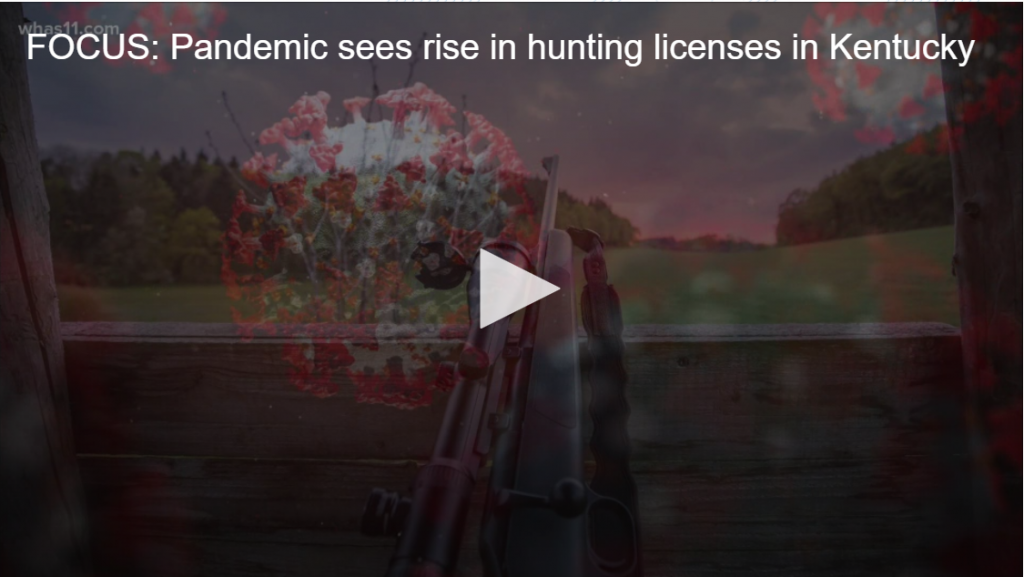 FOCUS: More on the hunt during pandemic

HODGENVILLE, KY. — In the age of COVID, there has been less for Kentuckians to do and worse the pandemic has put a lot of people out of work.

Low income or no income has forced them to trim the fat on spending, including at the grocery store meat counter.

It’s part of the reason the state believes folks are hunting more in the commonwealth. 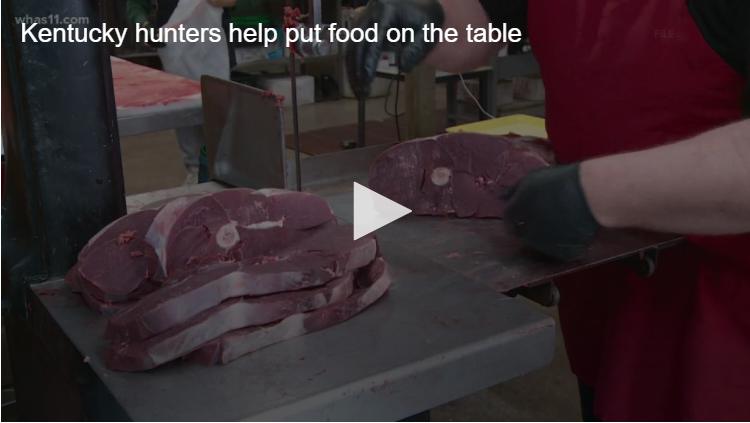 COVID-19 has taken a major bite out of the economy and budgets for families so Kentucky Hunters for the Hungry is filling the need.

LOUISVILLE, KY. — You don’t have to look hard to see that our area has more than an abundance of deer. In a year when more people than ever are relying on food banks to get by hunters are stepping up to fill a need.

Kentucky Hunters for the Hungry is looking to fill more donations than ever before as food pantries, food banks and soup kitchens see more requests due to the pandemic. 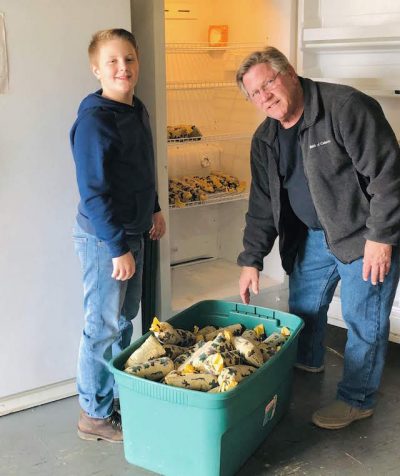 An additional 550 pounds of venison burger donated by local hunters and processed by Fairplay Meat Processing and Sano Meats was delivered to the Adair County Food Pantry and Joy Ministries.

Total deliveries now exceed 2000 pounds of nutritious and lean burger to be used for feeding the hungry in our local community. Processing is paid for by KY Hunters For The Hungry. Donations to KHFH can be made at Kyhuntersforthehungry.info. 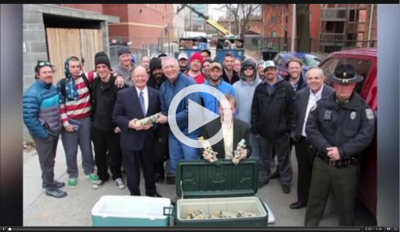 Kentucky Hunters for the Hungry Program Aims to Alleviate Hunger

LOUISVILLE, Ky. – Hunters in Jefferson County are trying to make this special time of year a little brighter for less fortunate Kentuckians.

The Kentucky Hunters for the Hungry (KHFH) is a statewide hunger relief program dedicated to providing a healthy source of protein to needy Kentuckians.

KHFH’s mission is to alleviate hunger and malnutrition in Kentucky by processing and distributing venison to those in need, to provide an outlet for hunters to help their communities, and to promote environmental stewardship through wildlife management.

KHFH administers the “Kentucky Whitetail Access” program. The program matches hunters with landowners, mostly often farmers, who are in need of deer population control on their property. KHFH receives the deer taken under the program.

Kentucky Hunters for the Hungry was founded in 2000. In recent years, the average annual donated harvest has risen to 60,000 to 70,000 pounds of processed venison, an amount that translates to 560,000 meals.